I had a feeling today that we weren’t going to be seeing any Audis when we pulled into the car park at the Biloela ANZAC Memorial Club.  Not sure why.

We started out day 2 of the Rural Succession and Continuity Roadshow again with the story of the Lawrie Family and their succession plan.  This time we were joined by Peter Lawrie.  Unfortunately Peter couldn’t join us in Emerald as he wasn’t feeling well.  Thankfully Peter was much better today and joined his wife Simone to talk about their journey.

We again broke into groups of the “older” generation and the “younger” generation in the exercise facilitated by Claudia Power.  There were again some common themes that came from the exercise.  Compare the photo below to the photo of the whiteboard from yesterday’s exercise in Emerald.

Frank Ricci from Entello Group spoke about the different ways that off-farm investment can occur.  In particular, Frank spoke about direct investment in equities such as shares. Frank’s description of becoming a shareholder in a company being akin to owning a slice of the business that the company conducts seem to resonate with the audience.

Frank also spoke about the opportunities that might be open to people wanting to invest smaller amounts of money in the beginning of an investment strategy allowing a portfolio to be built up over time. The Entello Group’s approach looks at direct investment in shares and equities rather than investment in products such as managed funds.

Frank explained that direct investment allows people to see the shares that they own in their own portfolio rather than the ownership of shares within a custodial structure such as a managed fund. Whilst this is a subtle difference it is an important difference and some people feel much more comfortable being able to see exactly what they own at any given time and what this might be worth.

Kylie Wilson’s presentation  prompted number of questions about structuring. In particular, Kylie made it very clear that it’s never a good idea to have the land and the business in the same structure for asset protection purposes. More than likely if someone is going to sue you, it’s going to be as a result of your business operations. Having the major asset being your land in the same structure as your business to make you a very easy target in litigation land.

During the panel discussion today, I had an opportunity to tell some of my war stories not only from life as a family lawyer but also from what Kylie refers to as my “rocks in your head” position that I sometimes find myself in as the executor of deceased estates.

Being a second-generation solicitor I sometimes have the “delight” of being appointed as the “independent” executor in deceased estates. This sometimes comes from having been known to some of my father’s clients as a somewhat younger (and thinner) version kicking around his offer after school.

During a panel discussion, Kylie made reference to a number of matters that she has dealt with where there have been no succession plans in place and as a result of poorly drafted wills, the situation has been made worse.

This allowed me to segue into the situation that I currently find myself in as the executor of an estate which has a large number of farming properties as part of the estate property. From what I can understand, I was appointed as the independent executor along with the deceased’s accountant as a result of the deceased remembering me assisting my father with debt collection work for a statutory authority in New South Wales.  Yes he apparently chose me because I used to sue him for statutory levies on a regular basis.

The deceased had made a will with a previous solicitor. Dissatisfied about the solicitor’s conduct in a commercial transaction, he uplifted his will taking it to my father’s office and signing a codicil appointing me as an executor. Despite the fact that the deceased had been advised on a number of occasions over a number of years that he should engage in some proper succession planning and update his will, he never got around to doing so.

Unfortunately for his beneficiaries, the lack of updating his will meant that his later intentions about how property was to be divided were never put into a succession plan or into his will. This unfortunately leaves me with the necessity to administer an estate where there are now three unhappy beneficiaries. They are unhappy because I am bound by the terms of a will which are different to what the deceased had apparently discussed with them in terms of his wishes.

This is one of the reasons why estate planning documents such as wills and powers of attorney need to be regularly reviewed and updated. 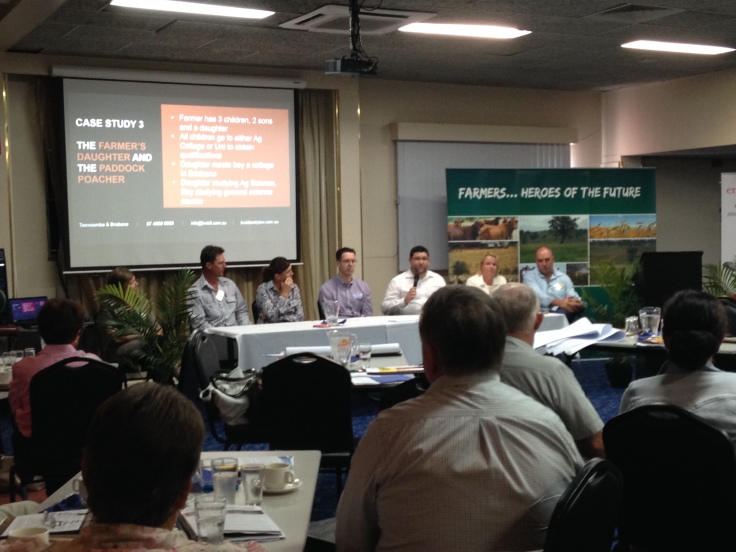 I was also able to tell some of my favourite war stories,  The Farmer’s Daughter and the Paddock Poacher.

This is a case study is taken from a real-life situation where the Paddock Poacher was the son-in-law who was in a situation where a considerable amount of farming property had been gifted by his parents-in-law to their daughter and to him. Had it not been for the gifting of the farming property (free of debt), there would have been very little in terms of property to divide between himself and his wife when they separated. However, the dilemma in the circumstances was the considerable contributions that had been made by the wife’s family. In an ideal world, a financial agreement could have been entered into when the property was gifted by the wife’s parents setting out the contributions that had been made on behalf of the wife and dealing with what might happen on separation.

It could have been a situation where the farming properties might have been quarantined and remain within the wife’s family and the other assets that have been built up during the marriage divided between the husband and the wife.

The panel session also saw a number of questions raised about having initial discussions about what each generation wants to achieve from succession planning. Claudia Power from RCS spoke about the importance of early involvement in the facilitation process to ensure that each generation is able to put forward what they see as important and what they want to achieve. 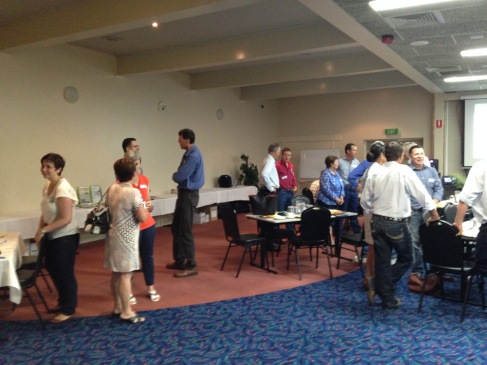 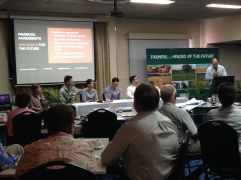 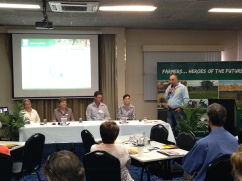 It’s important to engage all of the generations in succession and continuity planning. This also includes the generations that don’t actually know that they might have some involvement later down the track. I’m pretty sure this young fellow below might not have understood some of the concepts today but he will more than likely reap the rewards of his parents and grandparents engaging in proper succession and continuity planning. 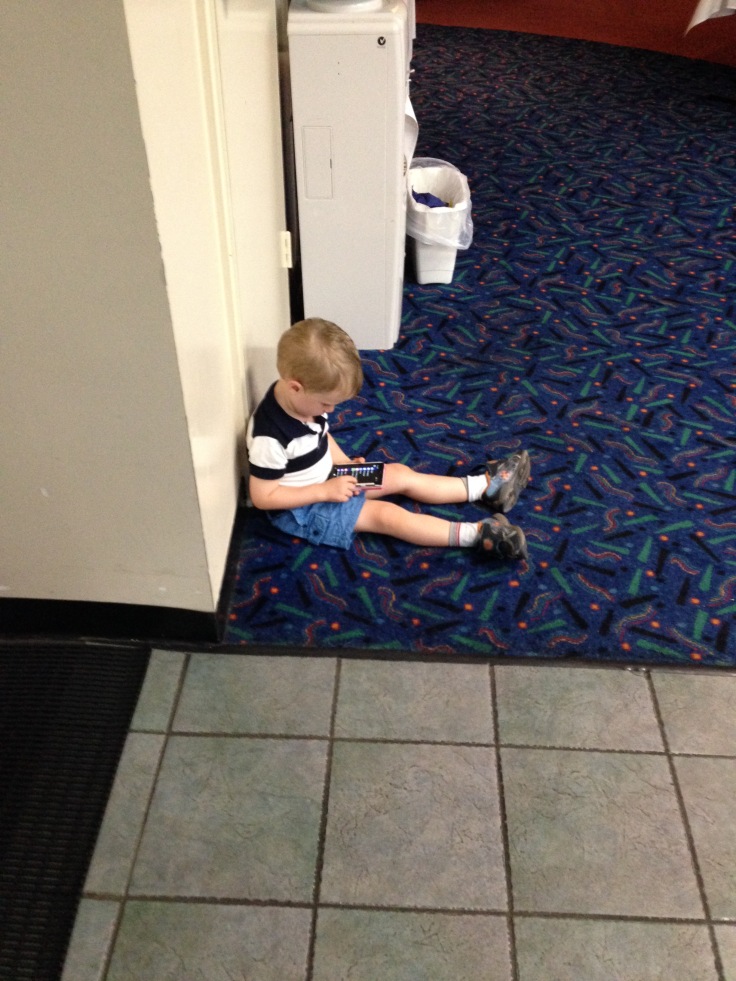 It was my turn to drive from Biloela to Rockhampton. The drive went a lot quicker than I expected and this was due mainly to most of the drive being taken up by a teleconference with the Federal Shadow Parliamentary Secretary to the Shadow Attorney-General. On Wednesday last week, Graham Perrett MP spoke to a group of concerned family law practitioners in Toowoomba about the current situation in the family law courts and the crippling delays that we are facing. Unfortunately I was in court and couldn’t attend the consultation.

After some slightly anxious moments when the low fuel indicator came on in Kylie’s Izuzu DMAX and the fact that petrol stations between Mount Morgan and Rockhampton appeared to be non-existent, we managed to arrive in Rockhampton before totally running out of fuel. It would have been an interesting picture for someone to have snapped seeing two solicitors try to push a pretty big ute towards a petrol station.

‘Tis the season to be ranty

Family Lawyers do Panto for a good cause

A family law perspective with a rural and regional flavour

Andrew McCormack is a Senior Associate and Accredited Family Law Specialist with Best Wilson Buckley Family Law. This podcast aims to bring an overview of important family law topics to the public and other practitioners with a focus on matters of interest to those who live in rural and regional areas.